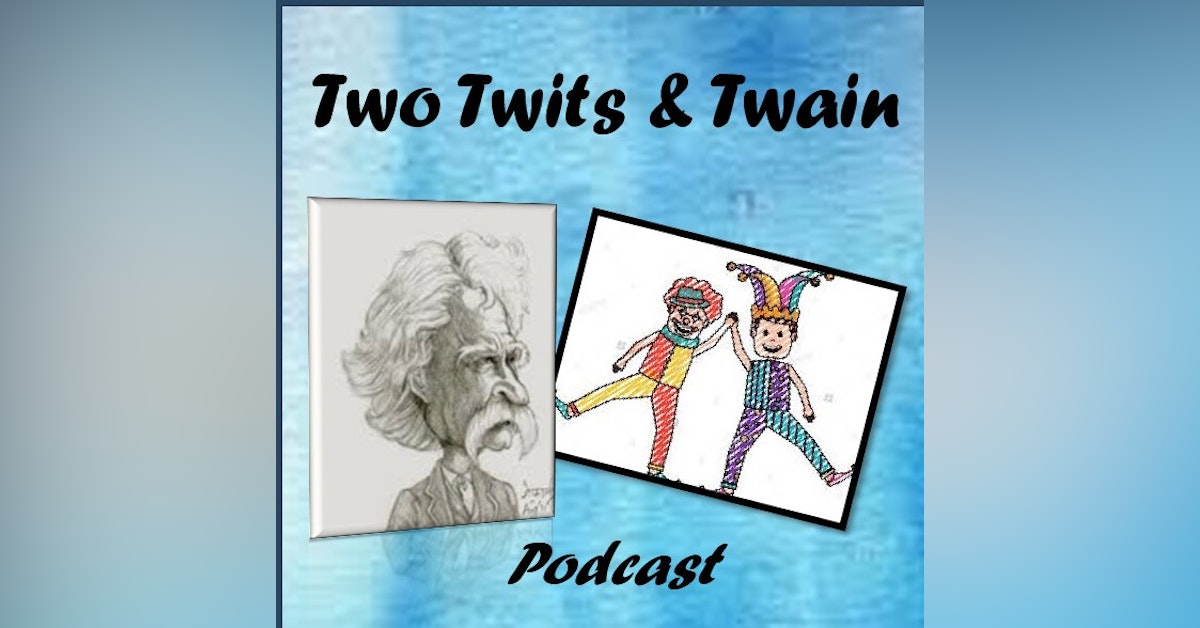 Mark Twain and a Banjo Man? What's that all about! The Twits have uncovered something very interesting! Listen and find out more!

And now. for the second episode of Two Twits and Twain, entitled “Doc, Doo-wop, and the Banjo Man.”

Mark Twain and a Banjo Man? What's that all about! The Twits have uncovered something very interesting! Listen and find out what’s up!

And now. for the second episode of Two Twits and Twain, entitled “Doc, Doo-wop, and the Banjo Man.”

Mark Twain and a Banjo Man? What's that all about! The Twits have uncovered something very interesting! Listen and find out what’s up!

For those of you listening to us for the first time, PLEASE PUT THIS EPISODE ON HOLD…and listen to Episode # 1 first.  Our initial dive into the Podcast world was quite unbelievable…something amazing occurred…as you will witness when you listen to it.  So please…do yourself a favor and come back to this after your initiation into the world of Mark, Clark & Doc.

Doc:    I’m sorry, you’ll just have to pardon him…and try to get used to that…whatever you call it…that worms its way out of Clark’s mouth from time to time…to time…to time…He just can’t help himself!  And…believe it or not…we all benefit.  Crap…did I just say that??

Clark: Doc, we’ve known each other for a long time…and I think that’s one of the nicest things you’ve ever said to me…but then you do always find a way to circle back to the finer things in life…

Clark:    Today, we’re continuing along the path we set last week.  Guess you won’t know what that path is unless you’ve listened to last week’s program.  Episode #1. So do it if you haven’t!  You’ll love it!

OK. That path has been set with the hope that Mark Twain will again join us.  Yes, that’s right. Mark Twain! He was here, or there I mean, in the flesh, sort of, in colorful Colorado, right in Doc’s studio! No Kidding! And no promises, but he said he’d love to be with us again on this episode.

D. That’s right – it’s just as Clark has said – Two Twits and Twain, we hope, today, right here – what a Tweet that would be!

C. And you think I’m the one with the groaners…!

Anyway, Doc, I do have something for us to do right now before we get into anything too seriously with Mark, if we are lucky enough to see him with us again.

…It’s from Ruth and she has one of those very sensible questions – namely - “Why is one of the Twits called ‘Doc’…is he a doctor?”

Shall I tell the story, Doc?

C.  First of all, Doc, I know you are clever and handsome…. and that you are a man with a magnetic personality, but you a doctor? I just…

D. Well, let me just interrupt, if I may.  There are a few reasons, Clark, that don’t have anything to do with those descriptions of me and my character, which, incidentally, are quite true if I may modestly point that out…anyway, you did forget to mention one very important of my many qualities that engendered this fetching moniker, and why the Doctor description is quite accurate...

C.  Why, of course! You ARE that man! That’s what we named you in our doowop singing group, the Fabulous Fourmeldyhides! You sang barely-tone…er, I mean baritone!

C.  And, we got tired of repeating your rather cumbersome name in our concert introductions. It was something Carl Heinrich von Richtoven, Ludwig blah, blah…some crazy Teutonic thing…but, you know? You’ve always been Doc to me…

D.  Well, there has been some competition for the name…some have thought that somehow I was involved with a certain shoe of that name – the Doc Martens…

Whaaa? Why that groan? I’d have felt like a “heel” if I hadn’t complimented you that way!”

OK, well anyway, I knew that Doc had German roots. What I didn’t know was that his whole name was a mouthful to say, and in concert, when we had to say it publicly, I just couldn’t get it all out. It was too…too rigid, too, you know??  …too, Germanic.

So then, one day at rehearsal, I had this flash.

Don’t snicker, Doc, I DO have flashes occasionally – even some useful ones!

I am standing there, ready to get into another superb a cappella rendition of a great song, and then the thought suddenly came to me – Doc! I’ve called him that privately for years. Why not in concert?? Yes, just like that shoe we’ve been talking about! Doc Martens. And then, that’s when I had that other thought. Doc! – the “Doctor of Doowop!” It was too good to pass up!

So, I said to him, “how about I just call you Doc, Doc?” Then he looked at me with a certain satisfied look, and it’s been that way ever since…

Hope that answers your  question. Thanks, Ruth, for writing. Remember, just drop us a note like Ruth did at contact@twotwitsandtwain.com

Now I have a question, Doc. Didn’t you tell us that Mark Twain said he might be back this week to see us?

Doc.    Yes, I did…and he did!  And there’s even a chance that he’ll have his banjo with him.  There’s a relatively unknown fact that he’s quite a musician…plays the banjo…and a bit of piano.  He also had a daughter, Clara, a contralto who created quite a presence on the concert stage.

Clark:    You know…he just might have been able to give us a few pointers when we were performing.  Too bad we didn’t know him back then.

Doc:    I knew who he was…and what he’d accomplished…just didn’t think it was feasible to talk to him…or that the universe would have allowed us to have him sit with us!  I’m still trying to get my head around what’s happening here!

Clark:    The ONE thing that I know for certain is that if he’s gonna show up, he’s late!  Wonder if that was one of his issues when he was alive?

I guess we’ll just have to grant him “clemency”!

Mark, great to see you again!

Hey…I see you brought your banjo!  This is gonna be FUN!

Mark:     Pleased to be back.  Sorry I’m a bit late, but ya didn’t tell me how breathtakin’ that Pikes Peak is!  Never did see that before!  Suppose I’ll have to drop in on Clark one of these days…I know it’s beautiful over there in France!

Doc:    Oh yeah…and adding to that is his beautiful wife!!!

Clark:    Enough of that personal stuff, ya Twit!

Mark:     Now…I’ve always had an eye for beauty….in just about every circumstance.  From the fair sex to horses…from mountains to architecture.

C:  Thank you, Mark. Delighted. And Mark, we also understand that you’re quite a musician.  You’ve kept that pretty well-hidden.

Mark:     Well, I never thought I was good enough with music while alive.  You know that we all contain music and truth…but most of us can’t get it out!  Now, I have no problem with the truth, but the music part is a bit troublesome!  So, I’d just as soon speak as perform.

Doc:    Oh…you’ve always performed!  Just not on the musical side.

Clark:  Since we already know you play the banjo; do you enjoy any other musical outlet?

Mark:     Well…you can tell from this voice, that I’m sure as Hell not a singer.

Doc:    Yes, we probably could have guessed that…

Mark:     I do play a little piana – but nothin’ I like to tell anybody about.

Clark:     If you play the banjo, do you play any other stringed instruments?

Mark:     Absolutely not!  Yes…well, I do play a stringed instrument but not one of those instruments that ya gotta pull that stick across the strings. I don’t care much for them. They produce ungodly screechin’ sounds…especially when yer just startin’ out.

Clark: Well, let’s just focus on the banjo then..

Doc:    Mark, did you know that there was a symphony orchestra composition by someone who played the banjo – and featured the banjo as the solo instrument.  It was written by a Bela Fleck, I think – called “The Imposter,” and premiered in 2014.  Appears the banjo is being elevated in stature!

Doc:    Our philosophy exactly, Mark!  As long as it brings you joy and laughter!

Clark:    Then I suggest we give Mark some airtime to do a little banjo pickin’…What are ya gonna play for us?

Mark:     How about a short sample of my favorite tune…”Camp Town Races?”

Doc:    I’m lovin it!  (interrupts the interlude…Mark stops playing)  Oh…I didn’t mean for you to stop…

Mark:     No – that’s all right…I’ve played long enough…after all, this is your program…

Clark:     yeah, but this Podcast is all about music and having FUN! We’re the Two Twits but YOU are the Twain.

Mark:      Ahhh…against the assault of laughter, nothin’ can stand!!!

Clark:    I think that calls for a toast!

Mark:     Just as long as ya don’t offer me a glass of water!  Ya know…Whiskey is for drinkin’…water is for fightin’ over!

Mark:  Well, you boys have a persuadin’ way of talkin’. Maybe a short piece…but then I got to skee daddle – you ain’t the only people I got to see this time, but you sure as hell are the only Twits on my schedule…lucky me!

Doc:  Will you come back again next time the Two Twits are together? We’re getting’ kind of used to having you here, and I bet you’ll be getting some letters from some happy listeners…

Clark:  Ok is right, Mark. Thanks for that. And thank you, Ruth, thanks again for writing with that great question.  Keep those cards and letters coming! Write to us at:  Contact@twotwitsandtwain.com

And don’t forget to check our website for schedules and rebroadcasts and other bits of Twitness at   www.twotwitsandtwain.com.